Sociolegal scholars could learn much from cartography, suggests Boaventura de Sousa Santos. The relationship between law and social reality resembles that between maps and spatial reality. Indeed laws are maps: written laws are cartographic maps; customary, informal laws are mental maps. Law, like a map, inevitably distorts reality to establish its exclusivity. Both are privileged ways of imagining, representing, and distorting social spaces and the capitals, actions, and symbolic universes that animate them.

So I asked my Legal Pluralism students to map their world, paying attention to three mechanisms that are attributes of all maps: scale, projection, and symbolisation. Here’s a sampling of their maps from our in-class blog, interwoven with Santos’ reflections:

In his article Law: A Map of Misreading. Toward a Postmodern Conception of Law, Santos asks: 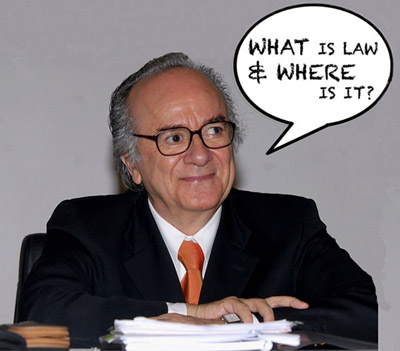 Sociolegal studies often emphasize the normative content of the law.

[Just as maps often build on the normative content:uber-law of Google maps]

I love to ride my longboard which is a long skateboard that is made to go downhill so my map consists of my favorite routes to take to get some serious speeeeed. They consist of quite a few hills in the downtown area. There are many more but these are the ones I go down the most. I’ve topped out at around 40mph so they can really fly.

Normativity is surely the heavy reality of law. But law is also imagination, representation, and description of reality. Where, then, is the non-normative dimension of the normative?

[Here, between the law and education buildings, in this detail from a Sound Map of Bascom Hill]

The sounds of Bascom Hill in the middle of the day are very much unlike most other parts of campus. I started by drawing a map of the hill with the buildings and the street behind it. I then drew the paths and the grassy area on the hill itself. That is the only part of the hill that has to do with sight. The rest of the map, however, is what one would hear if, say, a microphone was attached to each entity capable of noise on all areas of the hill at once. The way I did it was by walking every inch of Bascom Hill in the middle of a weekday and listened to everything I heard as I did, including my own footsteps. The sounds I heard included doors opening and closing, footsteps of students and other people, cars from the street, bikes from the street, heaving breathing of people jogging and running up and down the hill, the heavy footsteps of those people, pages turning in books from people studying on the grass, the wind blowing through the trees, and dampened music coming from people’s earphones. It was very important to me to take note of every sound I heard, because I wanted to prove that one could map most everything on the hill even with their eyes closed…

To be practical, a map cannot coincide point by point with reality. Maps distort reality through three specific mechanisms that are intrinsic attributes of any map: scale, projection, and symbolisation.

SCALE is a coherent forgetting, a decision to include more or less detail. What makes a map so useful is its genius of omission. It is reality uncluttered, pared down to its essence, stripped of all but the essentials. 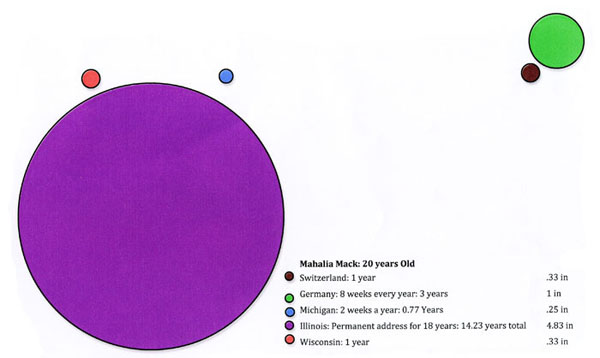 For me, time is very important. There never seems to be enough time. Having recently turned 20, I wanted to find out where I spent all of my time. This map allows me to visualize where I have spent my time. The circles represent the places: Switzerland, Germany, Michigan, Illinois and Wisconsin. The sizes of the circles are proportional to the amount of time I spent in each place over the past 20 years. The placement of the circles should somewhat resemble where the places are on a world map.

The modern state is based on the assumption that law operates on a single scale, the scale of the state. But multiple legal spaces are operating simultaneously on different scales. 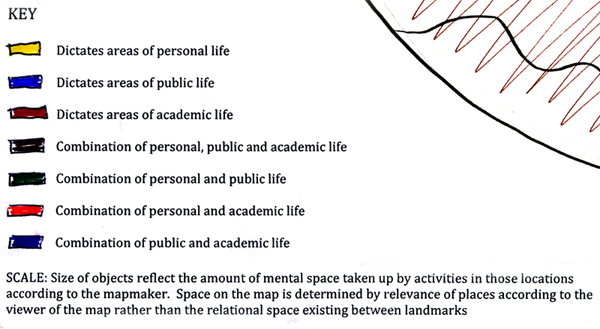 PROJECTION is the second mechanism of representation/distortion. To be useful maps must be easily carried about and stored. It is by means of projection that the curved surfaces of the earth are transformed into planes. The most convenient transformation cannot yield flat maps without distorting shapes and distance relationships.

[This Mercator projection map is not by us, but it is a good example of the distortion Santos is referencing. It is centered along the equator, distorting land masses near the polar regions. Greenland appears to be larger than South America, when in fact, it is 8 times smaller. Similarly, the size of the Soviet Union was distorted in Cold War era Mercator maps, appearing as a larger-than-life-size threat, as in this 2008 Economist Democracy Index map.] 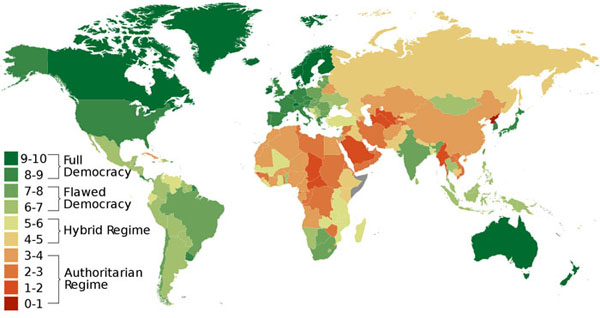 Projections do not distort at random. Each map, each historical period or each cultural tradition of map-making has a centre, a fixed point, a symbolic space in a privileged position around which the diversity, the direction, and the meaning of other spaces is organized.

Matt Kennedy (detail)
Both map projections and legal orders are grounded on a superfact, an interpretive standpoint or perspective. The private economic relations in the market are the superfact underlying modern bourgeois legality. 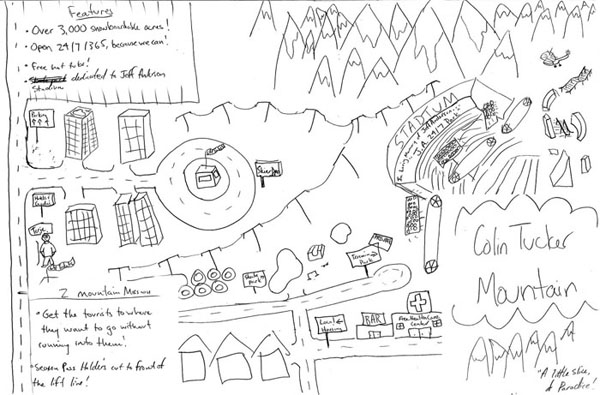 “A Little Slice of Paradise!” A Fictional Mountain Town in Colorado, established 2011.

This is a map of what my “mountain” would consist of. I would separate the town into tourist on one side, and locals on the other. This would allow a more healthy, family-oriented vacation on one end of town and an Olympic training facility on the other. Mandatory lift tickets upon entry would discourage sneaking onto the ski lift and other crimes. Terje, a historical figure in snowboarding will be next down the road, symbolizing the mountain’s mission personified in statue form.

Get the tourists to where they want to go without running into them!
2 Mountains, separate but equal!
Season Pass Holders cut to the front of the lift line!

SYMBOLISATION is the third mechanism of map representation/distortion of reality. It refers to the representation of selected features and details of reality in graphic symbols. Iconic signs are naturalistic signs that establish a relation of likeness with the reality represented.

If we look at the historical record it will show that the sign systems used in maps were initially more naturalistic and gradually became more conventional. But even today, maps may be more figurative or more abstract; they may rely on emotive/expressive signs or on referential/cognitive signs. 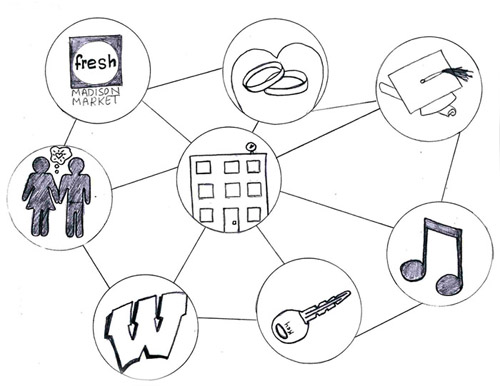 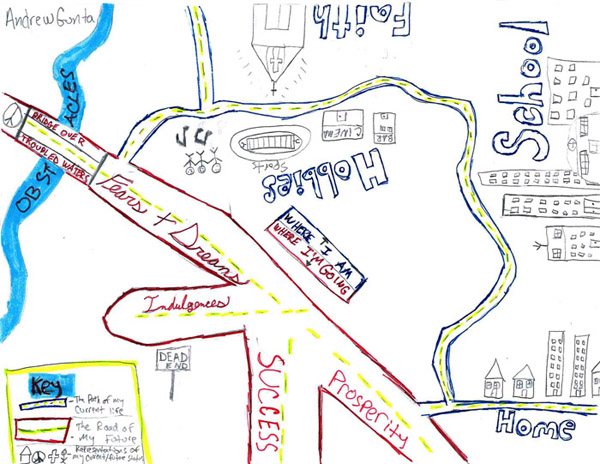 Maps also open our worlds to one another. If you are interested in mapping your world, be sure to check out:

Five Ways of Mapping the World, This American Life Episode 110 (4 September 1998). You can see the maps from this episode at Mapping.

Copyright nancy buenger 2023 - All Rights Reserved
Back To Top